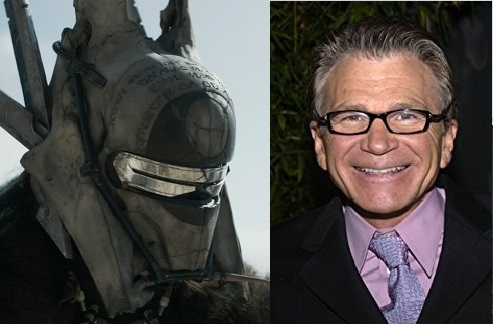 The following is my list of my favorite movies of 2017. I’m not saying I think they were the best movies of 2017. Arguably Dunkirk is a finely crafted piece of film, but with only a couple of the characters being named on screen, it just didn’t connect to me emotionally. I’m sure Phantom Thread is fabulous as well, but I have zero interest in it.

Get Out – It was the first movie I saw this year, and it’s stuck with me all year long. There are so many subtle hints and jokes within this film, that I discover something new all the time. It’s a master class in screenwriting and storytelling. I read the screenplay too, which has a completely different ending than either the theatrical or the alternate END_OF_DOCUMENT_TOKEN_TO_BE_REPLACED

This year the In Memoriam section of the Oscars is going to be longer than the award ceremony.

I’m writing this shortly after hearing about Carrie Fisher dying. Yeah, I’m a Star Wars fanatic, so of course I dig Carrie Fisher. But to me, she was something more. When I found out that she was a script doctor and wrote screenplays, that was the first time I really considered screenwriting as a cool endeavor. She was sharp and funny.

So that’s why I’m here in Hollywood. I want to write. I want to be like Carrie Fisher and be known for both my writing and my personality. She was amazing, guys. Yeah, she was also bat shit crazy, but aren’t we all?

Here is a more in depth look at my favorite films of 2016. I’ll steer clear of spoilers.

Starting with a cheat…

END_OF_DOCUMENT_TOKEN_TO_BE_REPLACED

After the release of the Rogue One: A Star Wars trailer last week, I posted on Facebook five IMDB message board thread titles that I felt really showed the best/worst reaction.

Later in the day, I had a talk with a gay Asian coworker about the reason behind the backlash. He didn’t get it.  That’s when I realized what it might be.   He’s had a lifetime of not seeing himself onscreen in genre films.   Most fanboys haven’t.

Straight, white males are used to seeing themselves represented in nerd culture. From Ant-Man to Zartan, comic books and sci-fi are riddled with straight, white male characters.   I grew up in a pretty white suburb.  When we played Star Wars on the playground, everyone wanted to be Han Solo or Luke Skywalker.  No one was calling dibs on being Princess Leia or Lando Calrissian.

If a movie hero isn’t a white male, for the longest time, that movie was a mainstream flop. Granted, Steel and Blankman are arguably terrible movies.  But Spawn were decent enough.  And Hancock was actually good.  The Crow was a cult hit and maybe that’s because Brandon Lee was only half Asian.

To the best of my memory, Val Kilmer in 2005’s Kiss Kiss Bang Bang is the first time I even remember seeing a gay action hero on screen.

It’s been said that video games are the future of entertainment. They don’t have a much better track record, although I always liked to believe that Pitfall Harry was a nickname for Pitfall Harriet, and she was running across the jungle, not in an exercise of futility, but for Civil Rights.

I’ve got news for the conservative parents who insist that Mass Effect made their son, playing a male Shepard, romance that hot male soldier. The game was impartial.  Your son banged that dude because your son wanted to bang that dude.  And believe me, he had to really work for it, just like I had to work to have my female Shepard bed down with Liara, the blue alien lady.

I like this new era of seeing diversity in our heroes. Any time I’ve played a video game where I could create my own character, I’d create a badass lady hero.  And it’s not that I’m such an emotionally advanced and progressive dude.  It’s just that if I’m going to stare at the back of someone running for 100 hours of game play, I want them to have a pretty butt.  And that’s the same as my coworker who said that any time he can create his own character, he’d create a super hot guy.

The backlash with female heroes seems to be a pretty American thing. Luc Besson almost exclusively heads up his films with strong ladies.  Mad Max: Fury Road is a technically an Australian film.  And even more so, should have been titled Imperator Furiosa: Fury Road.   American genre films, especially Star Wars seems to be the core of sexism and racism in nerd culture.

Was Mad Max any more groundbreaking than Star Wars: The Force Unleashed? Both movies are female lead requels of existing franchises with full realized worlds and cutting edge special effects.  Star Wars was woefully snubbed at the Oscars. How many black people are in the entire Mad Max franchise?  One.  Tina Turner.  Star Wars has Finn in a starring role and I really hope that it’s dropped casually and matter of factly that Poe is gay.  Star Wars also has a much deeper plot then, let’s drive towards the left side of the screen for an hour, then turn around and drive to the right side.

The Force Awakens was dismissed by many as being a retread of A New Hope. I couldn’t disagree more.  They’re similar only in that both stories are about people discovering their calling.  Isn’t that kind of the case of all origin stories?  A New Hope is basically just Luke’s story to blow up the Death Star.  The Force Awakens is mostly about the quest to find Luke Skywalker.  It isn’t just about Rey’s journey from survivor to hero.  It’s about Finn going against his literal programming to be a hero.  It’s about parents trying to fix their part in not being their for their son.  It’s a much deeper film than Mad Max and A New Hope.

One of my biggest hopes was that if I ever had a daughter, I’d have a son first, so he could be the protective big brother. But in this age, especially in this Star Wars age, of having role models like Daisy Ridley, Felicity Jones and hopefully a better used Gwendoline Christie, I realize I don’t have to revert to ancient beliefs and hokey old fashioned thinking.  If I ever have a daughter, she’ll get to live in a new era of Disney Princesses who don’t need rescuing.  She’ll get to live in an era where Disney Princesses wield lightsabers and steal Death Star plans. 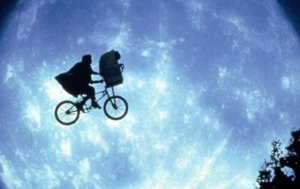 My five-year-old son Alex came home a few days ago insisting that he had learned from his friends that E.T. “Has the Force.” My wife chalked it up to him being cute and a believer in all things Star Wars, but he insisted it was true. Of course, she decided she’d show him by ordering E.T. from Netflix.

My wife and I had not seen E.T. since it was originally released 19 years ago, so the details were fuzzy, but she was sure he was no Jedi. Well, we watched the movie, and Alex is more convinced than ever that E.T. “Has the Force,” but now I agree with him.

In the movie, E.T. displays telekinetic powers, not unlike a Jedi might manipulate his surroundings with the Force.

Additionally, E.T. passes a kid dressed up as Yoda for Halloween, and tries to follow him, saying “Home, home.” It appears he recognizes Yoda, or at least his species. 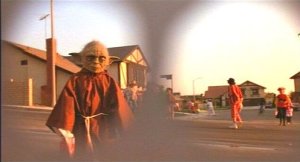 Then of course, a delegation of E.T’s species is visible in Star Wars episode I. 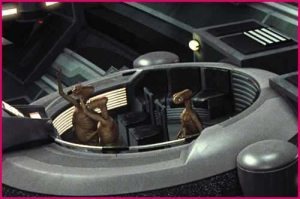 This may not be a new idea, but I am now convinced that E.T. does exist in the same universe as Star Wars, and that while E.T. may not be  Jedi, he, and maybe his entire species, is at least Force-sensitive.

Alex and his friends were right.

My interview with artist and all around cool chick Katie Cook! 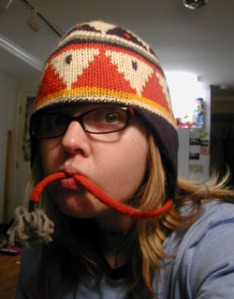 One of the greatest things I’ve done as a comedian is the celebrity roast of Darth Vader.  While we ended up raising money for a good cause, I also ended up becoming friends with some pretty awesome people in the Star Wars community.  One of those friends is the great Katie Cook.  She’s a staple of the convention circuit and her artwork has been used quite a bit by Lucasfilm.

Here’s what I think is particularly awesome.  She’s local!  Katie is a CCS graduate and has been out to see me perform.  I was self conscious about having somewhat of a potty mouth on stage in front of her because her art is so adorable.  Well, it turns out she’s not only heard an adult word or two in her life, but she’s been known to use them!  I’m still hoping that she and her husband can get together with me and Christine sometime, because he’s pretty damn cool too!