Movies I Won’t Be Seeing This Summer

Summer 2011 is shaping up to be a pretty awesome time for movies, especially if you love all things nerdy. Who ever thought we’d see Thor, X-Men First Class, Green Lantern, Harry Potter  and Captain America movies all in one summer? It’s a great time to be a geek. Sadly, though, into every summer falls a few garbage family movies. As I’ve stated before, I’m the father of two young boys, and am bombarded with advertisements for things people are trying to sell them. Lately, it’s been movie ads.

These are worst I’ve seen this year:

What a piece of crap this looks like. I can hear the Hollywood brain trust coming up with this one:

“They’re penguins, What should we call them?”

“One bites Jim Carrey a lot.”

And so on… My 5-year old could have come up with more imaginative names. Yeahbsolutely.

The Zoo Keeper, or Night at the Museum at the Zoo: 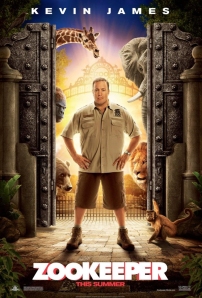 “Hey, kids like the King of Queens guy, right? …and funny animals? …and T.G.I. Fridays?”

The girl won’t marry him because he’s a zookeeper? Really? Don’t you have to have a degree to do that?

I’m going to make a bold prediction about this one. He realizes the blonde girl is a bitch and ends up with Rosario Dawson. Credits.

I will not be taking my family to either of these CGI animal turds. Luckily, they haven’t shown interest in either, I guess I’m raising them right.