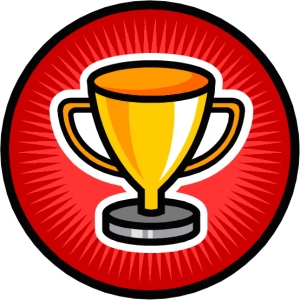 I’ve been on the fence for a long time about comedy contests.  One thing that’s never changed is the fact that I don’t like performing in contests at all.  They stress me out and they pit me against my friends.  I’ve always felt like comedy is supposed to be a fun thing, but contests always sucked the fun right out of it for me.  My question is this.  Is that the fault of the contest or my own?

Until just recently, like with most things, I blamed my contest anxiety on an outside source.  In my brain I realized that contests are subjective and at the end of the day they really didn’t matter.   And while I believe a lot of comedians already know that and they’re able to say that to their peers, it’s hard to get us to feel that.  There’s a huge difference between knowing something and feeling something.    I know there isn’t a monster behind me on the basement stairs, but I still feel the need to run up every time.

I’ve come to the realization that how I process stress and disappointment is all on me.  Contests are not inherently evil.  Currently a contest is running at Joey’s Comedy Club in Livonia.  The payoff is pretty big.  The winner gets to go to Los Angeles and hit some pretty impressive stages.   The judging is done pretty fairly, although it’s impossible to completely judge something fairly when what’s being judged is entirely subjective.

I think contests serve a greater good within the comedy community.  One local teacher slams contests universally if the contestants are required to bring people.  Why?  I honestly don’t get that.  For example, with this Joey’s contest I’m reasonably sure each person probably has to bring a handful of audience members.  I think that’s entirely fair especially considering how great the prize is.  Stage time is readily available pretty much every night of the week in the Detroit scene.  There are no bringer shows other than contests.  To hit the bigger stages in places like New York, you have to shill tickets on the street and hope enough people come to see you so you can actually get on.  The only hoop you have to jump through to get on stage at any of the clubs here, including the prestigious Comedy Castle, is you have to make a phone call and ask.  Maybe because we have it so easy most of the time, some people overlook that when they’re asking to bring people in order to compete for fabulous prizes.

Yes, clubs don’t run contests out of the graciousness of their heart, they run contests because it’s good business.  What’s wrong with wanting to run a good business?  Comedy is a business and contests are part of that business.    Summers are slow and you’ll notice every year when the weather gets warm, Joey’s starts the season with a contest.  They also follow that contest with a month or so of specialty shows as part of their mini festival where every local comic is welcome to pitch a show to the club.

Comedy contests pit friends against each other, but only if those friends let that happen.  Remember that a contest is just a silly type a show and don’t worry about who wins…even if it’s you who wins.  No contest is truly fair because there is not one definitive formula to determine what is funny and what isn’t.  Don’t let a contest crush your ego or kill your drive.  They simply don’t matter in the big picture.

If you don’t like contests, don’t enter them.  That’s the nice thing about them.  No one is going to hold a gun to your head and force you to enter.  Oh, and if someone does, then don’t even worry about winning.  Just remind yourself that you were performing under a great deal of stress what with that gun to your head and everything.

I think the greatest thing contests do is they teach us to be funny quick and work under pressure.  They’re also useful in keeping our short game tight.  I have to do an eight minute set next week.  If I were the kind of guy who liked to do contests, I’d probably feel more confident right now.

I’ve won contests, I’ve lost contests.  It doesn’t change who I am.  At the end of the day, I know I’m funny for what I do and for my audience.  Will I be funny to everyone?  No.  Nor would I want to be.  To be accessible to everyone is to be bland and middle of the road.  As more unique as my voice has gotten I feel like there’s less of a chance for me to win contests and that’s okay.  I’m not running out to enter any either.  When it’s all said and done, a contest doesn’t change who I am.  I do.

Posted on June 17, 2011, in More Misadventures! and tagged Comedian, comedy contests, mike bobbitt, off the mike. Bookmark the permalink. Leave a comment.