← My interview with artist and all around cool chick Katie Cook!
The Painted Lady: May 5, 2011 →

Mike vs. Kobe vs. The Game With No Name

A couple of years ago I joined Bobbitt on a trip down to Missouri for a weekend of shows. The journey was memorable for several reasons: spawning a still-running dispute over whose idea it was to go see In Bruges (mine), the discovery of a podcast deconstructing the 1987 triumph Masters of The Universe , the crowning of Mike as the King of The Ozarks and seeing the movie Doomsday , a relentless turd crusade starring Rhona Mitra.

He wanted to see it, saying it looked like a fun movie and I did not, saying it looked formulaic and cliched. I don’t remember how the conversation turned in this direction but I ended up writing a list of something like 18 dumb scenes I thought for sure we’d see in the movie – evidence of its predictability/assclownery – and off we went to the show. It turned out we were both right, it was one of those movies that’s so bad it’s a joy to watch. I ended up going 12 for 18 or so on my predictions and The Game With No Name was born!

That’s a little dramatic; we’ve not played the game since. And it wasn’t a game back then so much as me crowing about how right I was about Doomsday being grade A rubbish. The topic comes up in conversation every so often though, and we decided to make a game of it. First, we watch a trailer or two for an upcoming movie and make 10 predictions about what nonsense we think will go down. Then we trade lists and give each prognostications a score between 1 and 10, with the most likely one getting the fewest points and the least likely one getting the most points. You’ll see in a sec.  Most points wins. 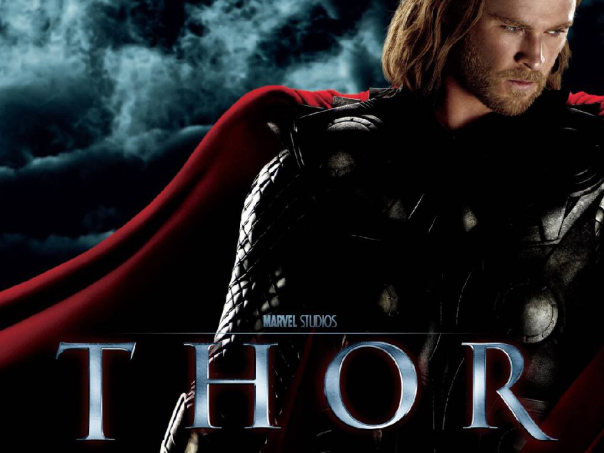 Mike: Of the three big superhero movies this year, Thor is in the middle for me.  I couldn’t care less about Green Lantern, but I am looking forward to Captain America.  Honestly, if Christine didn’t want to see Thor so badly because she has some sort of Viking fetish, I think I’d pass on this completely.  I don’t have high hopes for Thor at all.

[1 point]     Sassy sex craved female best friend or cohort for Portman delivering one liners.
[2 points]    A scene where Thor gets undressed and a female sneaks a peek.
[3 points]    Thor confused by some sort of technology like an iPod or a car.
[4 points]    Natalie Portman kicking ass and delivers a sassy one liner.
[5 points]    Captain America cameo.
[6 points]    Thor amused or confused by a comic book or superhero reference.
[7 points]    Huge bad guy easily defeated for humor.
[8 points]    A child emulates Thor after watching him kick some ass.
[9 points]    One of the soldiers sees Thor and runs away in terror.
[10 points] Portman appears dead which enrages Thor to Hulk out and beat his foe.

Kobe: I gotta say I feel like I’m getting played by this movie. I thought it looked really bad for the longest time but am starting to warm to it for reasons I don’t fully understand. I think I’m going to be mad at myself for thinking I might enjoy this movie, but we’ll see. I’ll be hedging my bets by seeing it in IMAX 3D, hopefully 50 feet of Natalie Portman running around will make up for any asshattery the movie throws at me.

[1 point]     At some point Natalie Portman’s character will kick someone’s ass.
[2 points]   Renee Russo’s character (Odin’s wife and/or Thor’s mom, I think) will defy Odin and help Thor.
[3 points]   There will be one of those old school Valhalla warrior feasts, during which someone will pull Thor aside to give him some sort of urgent news.
[4 points]    All the monster smashing in the trailer happens in the first 15 minutes of the movie.
[5 points]    Loki will have a transformation similar to Skeletor’s in the aforementioned masterpiece Masters of The Universe. He’ll overthrow Odin, take his staff and be transformed into Super Loki, complete with new duds and that ram’s horn hat.
[6 points]    Thor will get into a fight with some rednecks at the diner. This is a gimme, I feel.
[7 points]    Loki dupes Thor into fighting all those monster dudes in the trailer, leading to the “Not cool, man” scene where Odin banishes Thor to earth.
[8 points]    Thor will break into SHIELD’s tent fortress to get his hammer, won’t be able to lift it because he hasn’t learned the lesson of “don’t be a tool” and gets captured by SHIELD.
[9 points]    At some point someone says “we’re gonna need a bigger (something)”
[10 points] The token anachronism gag will either be something with Thor and hip-hop , or Thor trying to talk to the man in the TV (that old chestnut)

We should put something on this thing. Loser moves to Cambodia. Something. No?

I use a lot of semi-colons; often improperly.
View all posts by Kobe »

Posted on May 6, 2011, in Mike vs. Kobe vs. and tagged Comedian, comedy, mike bobbitt, off the mike, thor. Bookmark the permalink. 1 Comment.

← My interview with artist and all around cool chick Katie Cook!
The Painted Lady: May 5, 2011 →