← What do teachers make?
Hey Kids…Twitter! →

Every comedian in Michigan knows who Bill Bushart is.  He is the Godfather of our comedy scene.  He’s mentored either officially or unofficially just about every one of us at one point in time or another.  Not only is he a phenomenal comedian who takes charge of a room like no other, he’s also the Marketing Director at Joey’s Comedy Club in Livonia.  There are two vastly different sides to Bill’s persona.  There’s the on stage Pitbull who owns a comedy show and then there’s the St. Bernard who will make sure you are safe on your journey. 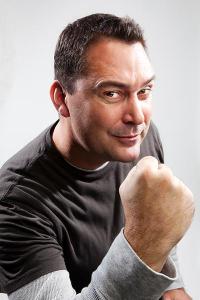 Off stage, Bill is the person I try to model myself after.  When a newer guy comments that I’m considered one of the nicer people in the scene, I merely tell them that I’m just returning the favor that Bill did for me.   And honestly, I wasn’t always this nice.  I’d shit on newer guys and Bill would call me on it reminding me that he remembers when I sucked.  Bill not only is a great comedian, but also a great human.

I sat down with Bill before one of the shows at Joey’s Comedy Club.  If you only know him from his act, this look into the man behind “Uncle Billy” may surprise you.  Now go pick up your hair.

Mike Stanley and I were talking about how you’re the person to give us both our first paid gigs.  You are like the Yoda –

You and the Star Wars stuff.  How old are you?!

Who was your mentor when you were starting?

Bill Hildebrandt.  I wouldn’t say he was a mentor, but his first words to me were to get out the business.  That was his advice to me.  I was too old and to get out of the business.  Steve Brewer, maybe?  I don’t know if I had a mentor, Mike.  I think I learned from people telling me no.  Kirk Noland was a good guy to me now that I think about it.  Kirk got me in here (at Joey’s).  He gave me my first feature gig.  He helped me get going.  He was a huge help in the beginning and that’s what everybody needs.  You need somebody to give you a leg up, man.  You know how it is.

Were Steve and Kirk the positive guys?  Because there are so many people who will just tell newer people to get out of it.

Steve was positive because we had a good time doing stand up together and we did some fun shows.  We’d laugh and it was just a wild time during that stint when we traveled together for about two years.  It was just crazy man.  But then you just go your own way and start to do your own thing, just like anything else in life.

I’ve never heard you seriously tell someone to just get out of it.  Here’s an example.  You and I grab lunch with Bob Phillips sometimes.  One day I was down about some trivial thing.  Afterwards you shot me an e-mail telling me to just suck it up.

Sometimes you want out, but then you realize you’re in so deep, what the hell else are you going to do?  I don’t know what else I’m even qualified to do, other than comedy.

Your background before this was newspaper.

Newspapering.  I always wanted to be a comedian.  I just did that stuff, just buying time.

You said Bill Hildebrandt said you were too old.  How old were you when you started?

Thirty.  I just kept doing it.

Is there anything you would’ve done differently?

Yes.  I might’ve gone out to LA now that I know myself better, but I really enjoy being part of the Michigan comedy scene.  I just do.  It’s a big part of my life and it means something to me.  There are a lot of good people doing it and you get to meet new people constantly.

Who are you excited about now who’s starting?

I like Trevor Smith, but who doesn’t?  He’s just cute as a button.  I like Brad Austin, he’s a funny kid, and Ricarlo Flanagan.  These are the guys you’re watching and you know they’re going to be working and doing things.  I’m going to miss somebody and someone is going to leave a message on your thing.  They’re all good kids.  I’m really excited about this guy Bill Bushart.  He’s a firecracker this guy.  He can play it!

You did The Dirty Show with Steve Brewer and Laura Lou.  I think you unfairly got labeled as a dirty comedian, but you’re really not.

On the way here I was trying to think if you even say the f-word once in your act.

I used to, but I pretty much took it out completely with the exception of once for emphasis on one thing.

Do you think that label has hurt you?

Did you have expectations going in?

And you’ve never been disappointed!  When I started you would sit in your office with Laura Lou and Sal Demilio and pow wow.  What’s your process like now for writing?

Writing process!?  Have you seen my act?  (Laughs)  If I write a few new jokes I try them on stage and test them there.  If they work I keep them.  If they don’t, then I just stack them with the other ones.

Laura moved away and you and Sal have gotten married to your respective wives, do you still get together with people?

No.  In a couple weeks I’m going to do a writing thing here at Joey’s with some of these younger guys.

How have things changed now that you’re a married guy doing comedy?

You’ve never really had much of opportunity for gonorrhea.

Comedy classes in general get a bad rap, but you’re a guy who continues to mentor and nurture these people, myself included.  So it’s obvious you don’t teach the classes just for the money.

Yeah, I didn’t get into comedy for the money!  I do things because I enjoy them.  It’s fun.  There’s something fun about the camaraderie of it and seeing people who are working now.  It’s good.

How much of a bummer is it when you see someone in the class who has a lot of potential, but then you never see them again after their graduation show?

Good lord.  There have been a bunch of people like that who I thought would be something else.  You know how this is.  There’s something different about this.  You have to be someone who wants to be disappointed and go through the struggles.  It’s a different person who does stand up comedy.  This isn’t for everybody.

In addition to performing, you’ve been on the business side of comedy too for as long as I’ve known you.  What makes a club run well?

Fun people.   Good people.  We have a good crew here.  I think that’s what makes it run well.  It doesn’t hurt to have an audience consistently and we try to do here.  The granddaddy is the Castle.  You know that.  They set the standard.  You try to live up to that.  I think Mark (Ridley) is a big influence with his attitude towards comedy.   You just watch the guy and see how he’s relaxed with it.  He takes it at a pace and that’s what I’ve learned by watching him.  Don’t be so rushed.  Just take it as it comes and you’ll be successful hopefully.

I think one of the biggest successes of Joey’s is the off nights.  You guys are open six nights a week.

Nine shows a week.  They’re not all sold out, but we try to keep the events going.  That’s what keeps us functioning.  I can’t imagine this place being dark any nights.  Why?  There are so many comedians out there wanting stage time.  You can have an open mic or you can have them put on a show or a fundraiser or regular shows.  The opportunity is out there.  There are so many young people doing comedy that I can’t keep up with them.  It’s amazing how many new people are coming to do the door to do comedy and seem like they’re going to stick with it.  We just had an open mic here last Monday and we probably had six new comedians and you could tell five of them would come again.  They have something, they were getting laughs and they were hooked.  You can just see it.

But it takes more than just comedians to have a show.

You need an audience.  People find their way here.  We do marketing.  We’re a staple.  We’ve been here forever.  People know they can come up here.

Does the marketing go back to your newspaper background?

Is there one piece of advice you think all new comedians could learn from?

← What do teachers make?
Hey Kids…Twitter! →