In this episode, Allyson Hood and I try our best to convince my cohost Sam Gasch that Goonies is a perfectly fine movie.

My writing partner and best buddy DJ Dangler and I will be launching a fun little podcast in the next few weeks. While writing, we end up having sometimes silly, sometimes introspective conversations. We decided to record them. In this first one, we talk about our favorite living wrestlers. We hope you like it.

The art is from my friend Joe Apel.

The intro music is from the Mutants.

Sam and I dissect Robocop and figure out how to make the ultimate remake!

My friend, screenwriter/improviser Sam Gasch and I have launched a brand new podcast. The trend in movies these days is that just about every big budget feature is a remake of something else. So every other week we will look at an old movie and figure out what’s the ideal way for Hollywood to remake it.

Here’s a link to the preview episode. Please subscribe in your podcasting catcher of choice and write us a review so we know how to improve the show. 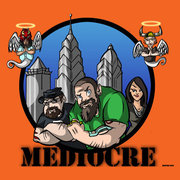 Mike and Kobe have recommended their favorite podcasts in previous posts, but I’d like to bring your attention to a few shows myself. These are fairly popular shows that feature more non-professional performers. Please note, all these podcasts are explicit and probably not for listening to while the kids are around.

The Geekshow Podcast: Recorded in Salt Lake City, the Geekshow features a large and sometimes changing cast of panelists who discuss the latest in comics, movies, TV and other pop culture topics. The panel will be the first to remind you not to take your fandom too seriously, they certainly don’t. The show features local Salt Lake City morning radio personality Kerry Jackson, and a couple professional movie (Jimmy and Jeff) and television (Scott) critics. The real reasons to listen, though, are the two regular guys on the show, Lee and Shannon. Check out an episode or two and you’ll see what I mean. This show is definitely NSFW and hilarious.

Tell ‘Em, Steve-Dave!: Yes, these guys have been in a few movies, but they are far from professional actors. The cast of this podcast include Walt Flanagan and Bryan Johnson, who have been featured in most Kevin Smith movies, and their co-host, Brian Quinn. These guys are funny. Having been friends for many years, these guys know how to push each others’ buttons, and do, to great comic effect. It’s a fun show, definitely worth listening to for the banter, bickering and wide range of topics they discuss.

The Panels on Pages POP! Cast: The POP! Cast was born from the Panels on Pages website, a geek review site, and the online community it has spawned. Join Lee, Jason and Jason, and sometimes Jose or any of their other cohorts as they discuss comics, movies, toys and general geek nonsense. These guys are another group that doesn’t take themselves or their fandom too seriously. Listen in as they discuss any number of topics, including semi-regular games of “FMK” (Fuck, Marry, Kill). Additionally, they have a whole weekly schedule of related podcasts they drop into their iTunes feed, on more specific topics like movies or pro wrestling.

The Mediocre Show: Broadcasting from Philadelphia,PA, the Mediocre show has been around since before podcasting was cool. Hosted by Eric Tomorrow, the show has had a few different co-hosts, but has hit its stride with its current cast, including Eric’s wife, Hope, and Tha Mike, formerly of the Awful Show. There is a reason these guys have gathered such a rabidly loyal fan base. They include their listeners in the show, and interact with them regularly, never acting like they think they are better than them. The show is also a fun listen, often discussing current events, pop culture, making fun of Myspace “musicians” and expounding on their deep love of barbecue. Usually clocking in at 2+ hours an episode, prepare to kill some time laughing with the Mediocre Show.