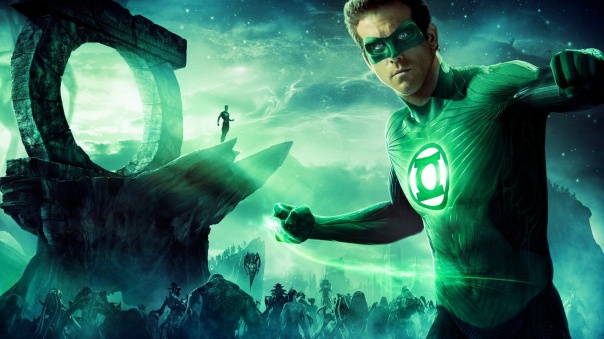 "I hope this movie doesn't suck!"

Summer movie season is fast approaching, and with it comes the inevitable movie tie-in toy lines. With typically lackluster offerings over the years (refer to the Playmates  3-¾” Star Trek line from a couple of years ago), the major toy companies have successfully lowered my expectations of what we will see for movie tie-in merchandise, particularly in the action figure department. This year’s Green Lantern movie toys from Mattel stick to the long-standing “Throw anything on the shelves, kids will buy it!” tradition.

We had all had seen pictures of the line from Toy Fair earlier this year, and I was under whelmed to say the least. The toys looked kind of cheap, and the likenesses didn’t look right. Today, however, I got to see the 3-¾” toys in person at a Toys ‘R’ Us store.

Holy crap, what steaming piles of dog turds these are. As fake-y as the CGI characters look in the trailers and TV ads we’ve seen so far, they look even goofier in plastic form. Kilowog looks like a cartoon dog. Hal Jordan looks like a stiff-armed Jerry Seinfeld.  Also, the line boasts a whopping 6 points of articulation – shoulders, hips, head and waist, at least on the figures I saw (Sinestro, Hal and Kilowog). It does appear that some of the figures have ball joints at the shoulders, which provide some range of motion, but most of the Hal Jordan figures are simple up-down swivels. So, the only action poses you can do with them are waving, pointing, and goose-stepping. At $8.99 MSRP per figure, are we really supposed to get excited about toys like that?

As toy collectors, we have come to expect better, even in a 3-¾” line. In a hobby where Hasbro is putting out super-articulated G.I. Joes, Jedis and Marvel Superheroes, we demand better. Mattel has really dropped the ball on this line, in my opinion. They can say it’s aimed at kids and not collectors all they want, but it’s no excuse for poor quality. Hasbro has been making beautiful figures at that scale for years, Mattel just can’t seem to get it right. They should have learned from their ill-fated DC Infinite Heroes line a couple of years ago. You need to please the kids and the collectors with a line like this to be successful, and you do that by offering a combination of cool sculpts, reasonably good articulation, and a high level of playability. You don’t achieve that by giving us cheap-looking, stiff-armed junk. 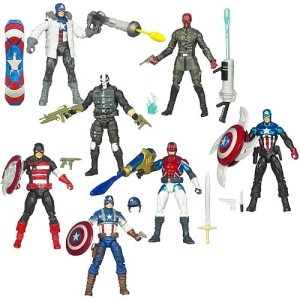 To be fair, the 6” line doesn’t look terrible, but those figures are fifteen dollars each. I’m already stretched thin trying to collect toys I really want, like the great 6” DC Universe  and comic-book themed Green Lantern lines Mattel is putting out, which does prove Mattel can make great toys when they try. Too bad they didn’t put in any of that effort here.

In short, I will not be buying these, not for me or my kids, not even when they inevitably end up in the clearance aisle at Wal-mart. Am I completely off-base? Does anybody want any of these? What movie toy are you looking forward to Thor? Captain America? Let me know.

Dennis Burdziak is a toy enthusiast, comic book reader, and friend to people more talented than himself. Follow him on twitter @dburdziak.