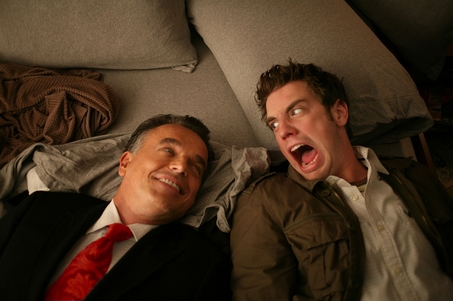 Bret Harrison is one of my favorite television actors. I first became aware of Bret when he briefly guest starred on That 70’s Show when Topher Grace left the show. His part was funny, sending up the typical replacement characters sitcoms had seen over the years. Unfortunately, all of the terrific shows he has starred in since then have been short-lived. In all 3 of the shows we have seen him star in, he has basically been the charming straight man to a cast of oddball characters, trying to make sense of a situation he was thrust into. Bret is easy to identify with in each role, and manages to be funny and charming, and the underdog we root for in each series. 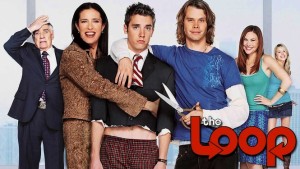 The Loop – In this short-lived Series, Bret played Sam Sullivan, a young airline executive, struggling to fit in at work with his older co-workers, and to satisfy his boss. He also tried to fit in a social life with his friends, who were still living the care-free life of the typical early twenty-something. The show was hysterical and charming, typically finding Sam’s personal and professional lives at odds, and him struggling to make both work. TheLoop unfortunately ran for only two abbreviated seasons on FOX from 2006 to 2007, being cancelled before episodes of season 2 ever began airing. 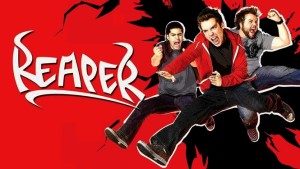 Reaper – Lasting three seasons, reaper focused on Bret’s Character Sam Oliver, whose parents had sold his soul to the devil, resulting in his life of servitude to the Devil, expertly played by Ray Wise. Sam, along with his friends, was tasked with capturing souls escaped from hell and returning them through a drop-off in the DMV. The best part of the show was the interaction between Sam and his friends, Sock and Ben, played by Tyler Labine and Rick Gonzalez as they chased escaped souls while working at the Work Bench, a home improvement store that inexplicably carried every item they could ever need to aid them in their task. The series also built up a pretty impressive mythology in its short run, introducing the devil’s slick son, a demon girlfriend for Ben, and Sam’s dad turned into a zombie, living in a chest freezer in the garage. Reaper ran from 2007 to 2009 on the CW network, and was dropped after the third season ended on a cliffhanger, seeing Sam lose his girlfriend’s soul to the devil.

V – Bret played a scientist drafted into the human resistance by the series’ main characters. The role was small, and the show’s ratings were already low when he joined late in the second season.

Breaking In – A new show this season on FOX, Breaking In followed Bret’s character Cameron Price, a computer expert who is recruited by a security firm that specializes in breaking in to secure locations to test their existing security systems. In its brief run, the series sawCam pine over his beautiful co-worker Melanie, played by Odette Annable. The cast also included cash, a nerdy fanboy gadget expert, who was constantly dropping references to pop culture, including re-making the entire Star Wars trilogy starring him in every role. Christian Slater played Oz, the owner of Contra Security, the eccentric boss who was constantly manipulating the staff into doing whatever he needed. The show was full of funny and nerdy moments, including an office-wide Nerf gun fight that ends with Oz firing a very real arrow through the water cooler to break it up. Or cash having to face off against a Ninja Turtle at Comicon to retrieve a copy of Goonies 2, a movie they had been hired to protect. Apparently a victim of low ratings, the show only lasted a brief 7 episodes on FOX this season.

Three times now, (four if you count V) I have been burned by shows starring Bret Harrison, but I will keep tuning in whenever I see him in the cast of a new program. I hope the next one sticks, and America sees just how brilliant and funny a comedic actor Bret is.

I checked, all episodes of Reaper are available on Netflix instant watch, and the Loop is available on DVD from them as well. Do yourself a favor and check them both out.