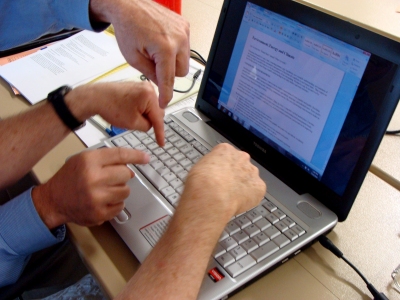 I write best with a partner. I’ve tried a few different ones over the years before finding one who I really click with.  And I found him completely by accident.

The hardest thing I found about writing with a partner is that one person is always going to be more motivated than the other. Some days you may be the motivated one, while other days it may be them.  No relationship is truly 50/50 all the time.

Whenever I write something, I send it out to a bunch of people to get feedback. Very few people actually ever get back to me.  DJ Dangler always does.  And when he does, he’s thorough.  The first thing I remember critiquing was a spec script I wrote for Bob’s Burgers.  We went through it line by line picking apart dialogue that didn’t feel true to characters and moments that didn’t feel like the show.  It was incredibly helpful.

The thing that he and I just pitched was originally written as a live action show. As it developed, it became clear that changing it to an animated show would open up a universe of opportunities.

DJ is a few years younger than I am, and those few years make a big difference. I went through most of teen years without a cartoon aimed for my age group.   The Simpsons were just bumpers during the Tracey Ullman Show for most of the time I was in high school.  And the Beavis and Butt-Head “Frog Baseball” short didn’t even debut until after I graduated.  In order for me to get into an animated show, I really have to get over the fact that it’s animated first.  DJ is different.  He’s always had cartoons in his life.

Having someone with experiences and strengths different than yours is great to have in a creative partner. DJ’s brain works in ways mine simply doesn’t.  We’re both pretty opposite ends of the spectrum.  I’m more of a classical story teller, tuned into the mechanics of script writing, while DJ’s brain works without restraint.  We pull each other to the center.

I romanticize things and thought that he and I never say “no” to each other and that we always went down paths together until we hit a mutually agreed upon dead end. He pointed out that I’m definitely seeing our relationship through rose tinted glasses and we argue a lot!  And he’s right.  I can remember a few nights where I was shooting down every idea he had and then we agreed that we got about as much work done that day as we were going to do.  Because we lived within walking distance of each other, I’d sometimes walk him half way home and we’d decompress.  My memory is that we never ended a writing session angry with one another.  Frustrated, definitely.

Writing with a partner is about compromise. I’m stubborn and spoiled.  My parents not only gave me everything I ever needed, but they gave me everything I ever wanted.  I get crabby if I don’t get my way.  I’m a child.  When DJ and I would work on a script, it was very hard for me to accept the fact that DJ has his own timeline.   That’s my biggest hurdle with writing.   I wrote a screenplay with a single mom in Michigan and was constantly grouchy about the fact that she had other responsibilities beyond our story.  It’s easy for me to take ownership of my issue while I’m not currently collaborating with anyone.

There are a lot of advantages in writing with someone. Dialogue is going to sound more natural when you have a person to actually speak it to out loud.  You’re going to be able to catch spelling and grammatical errors quicker because you’re proof reading one another.  With this article, I’m going to have to wait until Kent Tucker texts me.   And I’m going to be so mad at myself if I transposed to and too again.   You’re going to generate content you couldn’t have come up with on your own.  DJ and I wrote a screenplay and in it there’s a joke that DJ wrote.  I don’t completely get the joke.  I understand it enough from context, but I didn’t know the reference.  I like that.  It makes the story feel more “real” for me because there’s plenty in the world that I don’t know.  Your characters will also have distinctive voices because a lot of times you’ll find you and your partner start taking ownership of certain characters.

My favorite thing about writing with someone is that you have a teammate who can pick you up while you’re down. Living in LA is brutal.  Everything is so expensive.  Nothing moves quickly enough.  The traffic is a great metaphor for show business.  Nothing is moving and there’s no explanation why.  Once you get to the end of a jam, things go smooth, until they stop again without rhyme or reason.  Hollywood is dirty and smells like urine. The soundscape is a constant barrage of sirens, helicopters and car horns.   There were so many times where I thought this was all hopeless until DJ would say or do something that made it better.  And I hope I did the same for him.

My advice to other writers is try writing with a partner and see how it goes. If you have someone who gives you good feedback on your solo stuff, then maybe that means they like what you do enough to want to team up.  Steer clear of people who don’t give you feedback.  If they can’t find the time to do that, then they’re probably going to struggle to find the time to write too.  Find someone who brings out the best in you, who you like spending time with.  You can’t have DJ though.  He’s mine!