← What to do when you can’t sleep.
Nerd Comic Rising 20: Ricarlo Flanagan →

I’m fascinated by all branches of performing arts.  Stand up comedy and burlesque share a lot of the same roots in show business, both starting back in the vaudeville circuit nearly a century ago.  A few years ago I did a Halloween show with my friends the Detroit Rockabilly band Graveside Manner.  Also on the bill was the burlesque troupe Detroit Dizzy Dames led by the wonderful Lushes LaMoan.  We became Facebook friends and I couldn’t help to notice how incredibly busy she constantly is. 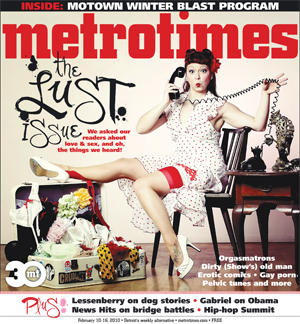 For me, the hardest part about being a performer is figuring out how to juggle so many different schedules.  We’re all essentially small business owners trying to sell a product, and that product is ourselves.  Somehow Lushes manages to not only juggle the business of Lushes LaMoan, but is additionally teaching burlesque and serving as the Branch Director of the Detroit chapter of Dr. Sketchy which is an “anti-art school” featuring local models and burlesque performers, and she manages to juggle it all very well!  She’s one of the hardest working performers in the city and has already made a name with herself with noteworthy accomplishments like being featured on the cover of the 2010 Metro Times Lust issue.

I think I may have figured out how she does it all when I had a chance to catch up with her at a recent Dr. Sketchy event at the Scarab Club downtown.  She multi-tasks incredibly well!  We talked while she arranged snacks for all the attendees, delegated chairs being set up for the artists, and fielded questions from a long line of people.

The first I remember meeting you was that Halloween show a few years back.

Oh, so I was there for the very beginning?

This is weird because most people I’ve interviewed I already know really well.  I did some research for this and if my research is correct, you came into the world of burlesque in 2006.

What amazed me was that show we did was 2008 or 2009 and you were the person who seemed to be holding everything sort of together.   I guess this is the theme for what I want to get to.  Your schedule is insanely busy.  You teach burlesque, pole dancing…

Not pole dancing!  I teach at Pole Addiction and I’ve been given a stigma because of the name of the business.

What is Pole Addiction?

Pole Addiction is a studio that incorporates pole aerobics; trapeze, the traditional circus style trapeze; lyra, which is the aerial hoop that you’ll see Roxi Dlite do in her burlesque, silk ropes and I teach burlesque there.

And on top of that you’re the new Branch Director for Dr. Sketchy.

You, like me, are juggling day time responsibilities too.  How do you do it?

You know, every time I get interviewed by a “real job” they always ask.  I always say, my time management, I have a lot of things I manage.  The things I do in my everyday life are more of a priority.  Sometimes it’s five/six events in a day and I just grin and bear it.  Sometimes when I get home, the stress falls heavy on my head, but when you get out there you just have to rock and roll.

You’re engaged and your fiancé is also part of this world too.

Absolutely.  He’s a good backbone for me.  We coproduce the troupe together.  He does a lot of the things I can’t do which are a lot of the technological things.  I can do the motherly things, the nurturing, the teaching…

What do you enjoy about teaching?

I really like empowering women and giving people the confidence they should already have and helping them recognize the light they already have within.

I taught stand up a little bit and not all of the students were people who wanted to be comedians.  Some of them were people who just wanted to get over a fear of public speaking.  What kinds of people are taking burlesque classes?

You’re more of a traditional burlesque artist.  What are the differences between the traditional style and the neo-burlesque?

I started out neo.  The vintage or the traditional just falls more naturally for me.  I was trained in the comedic arts as well, so I can get away with the cheesecake stuff.  But I really found my niche with the vintage and the traditional burlesque.  The difference is not only the music, but the styling of costumes.  The classic and traditional styles will be gowns and traditional costumes with the panels, the netted bras with the tassels that hang out of them.  And the style and the manner you conduct yourself on stage also is the difference between the neo and the traditional.  With the neo you’ll see more modern day techniques applied.   Neo could also fall into the circus and sideshow aspects of it.  There wasn’t a lot of that back in vaudeville burlesque.

I read about your comedy background that you mentioned.  What exactly was Switch Play TV?

Switch Play TV was an urban based sketch comedy television show.  We’d get together Friday nights and improv for three of four hours, go over our scripts and Saturday morning tape our skits.   So it was weekend dedication and I did that for three years.  That really prepared me.

Do you have an improv background then?

I do.  It’s through high school and community theatre.

I imagine improv has to help with burlesque.

The nice thing about stand up is the worst that can happen is maybe you knock over your drink on stage, but with all the intricate costumes in burlesque I imagine a lot can go wrong and a lot has gone wrong.

Absolutely.  When you’re doing a play or a live performance on stage it’s never going to be the same because there are outside factors that always take place.  A bulb might break, a strap might break on shoes, a stocking might fall down, there’s always something that might happen and you have to be prepared for the uncertain.

Burlesque has been making a resurgence since the 90s.

The revival started in the 90s and that’s when it turned neo-burlesque or the new movement.

What do you think caused the resurgence?  I’m guessing back in the 30s, 40s and 50s burlesque maybe started because of war time, but I could be totally wrong.

I’m believe the resurgence has to do with women nowadays don’t get dressed up when they go to the store like they used to and it’s embracing the femininity and the power of being a woman in the way you portray yourself in everyday life.  Women started realizing our mothers did this 30/40 years ago, lets bring this back.

I interviewed a female comedian earlier today about sexism in comedy.  Is there sexism in burlesque or no because it’s a female dominated art?

A lot of women love burlesque.  They love coming to burlesque shows because it’s giving them a way to perceive the power in a way a woman can be and they enjoy watching that, but of course you can get some creepers who come in off the street that don’t know what it is and you deal with them the best you can.  For the most part people who come to burlesque shows know what they’re coming for and want what they’re coming for.  It’s the folks who don’t know what burlesque is who you have the problems with.

When I stopped doing improv I was looking into getting into modeling, but I was always told I was too short or to fix my teeth.  They’re beautiful now.

Oh yeah, have they been fixed?

Oh yeah, braces many years back.  I found burlesque through Lisa Spag who started the burlesque movement here in Detroit 12 years ago.  It’s where Hell’s Belles came from, we came from and Lily LaRue came from Hell’s Belles.  She really is the Mecca of Detroit.  So I contacted her and asked how I do this pin up calendar stuff.   She said, “Come to a show and see if you like it.”  I went to my first show in 2006 and saw Satori Circus and Sprocket Hole.  They sold me!  I was sold.

Satori…Russ is one of the most amazing people I’ve ever met.

Absolutely.  I look up to him as my mentor.

I guess in stand up the goal is to be someone like Louis CK where you have total control over your career and you can explore it in different avenues like television, film, live or whatever.  What’s the game plan for burlesque?

My goal is to eventually open up a burlesque theatre house here where performers from the state or nation can come and call home and I can put the love and appreciation for all performing arts into that.

Yeah, you have a diverse background.   Why isn’t there more of a crossover in Detroit between burlesque and stand up like there is in LA?

I have yet to get a good comic to come and audition to be part of our troupe or say, “Hey, I want to come and do adult based burlesque style comedy.”  And I’m also in search of a chanteuse.   We just lost our singer to doctorate school.  I’m still in search of those few diamonds I’m missing.

So while we’ve been talking, you’ve been setting up for Dr. Sketchy.  How long has Dr. Sketchy been in Detroit?

This is year number five.  The Detroit branch is one of the first branches that started.  Molly Crabapple is the head honcho, the creator, the mama of the whole idea.

She’s an artist too.

She’s a wonderful artist!  Sean Bieri started Dr. Sketchy here five years ago with the help of Sparkly Devil who’s now in LA.  He brought it here and it’s been going strong.  He turned it over to me and I hope I can do it just as well as he has.

How can people find you online?

I own LushesLaMoan.com, it’ll lead you directly to our Facebook.

I admire how much you’re able to successfully do with both the performance side and the business side of things.

Thank you!  I appreciate that.

← What to do when you can’t sleep.
Nerd Comic Rising 20: Ricarlo Flanagan →