Can Heckling Be a Two Way Street? 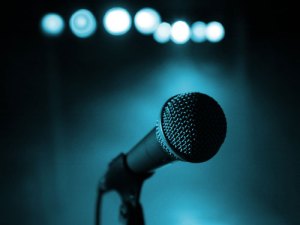 It got me thinking much deeper.  Basically, why is it okay for a comedian to bring someone into the show, but it’s not okay for someone to bring them self into the show?   One of my first experiences with live comedy was at Second City in Detroit.  The entire troupe improvised a musical number about how bad it would be to be out on a date with me.  It was pretty brutal and was a thing that has stuck with me almost a dozen years later.  On the other hand, I recognize that I’m the kind of comedian who loves going to the audience and potentially causing the same level of emotional damage.   And I’ll say that having done about 1,500 shows, I think I’ve only chosen poorly three times on who to bring into the act.  Most times I have a pretty good knack of picking people who are having fun.   Sometimes though, like Thursday at Joey’s, I choose poorly.

Let’s dive into Thursday deeper and then try to get back on track.  I needed to record a pretty geek-centric seven minute set, so I opened with seven minutes of pretty hard core nerd comedy.  It didn’t go well.  In fact, it may have been the worst seven minutes I ever had on stage (until the following night)!  I not only lost the audience, but I lost the audience to the point where everyone in the room broke out into conversations at their own tables.  But I committed to my seven nerd minutes!  When it was done I knew I needed to dig myself out of my hole and the easiest way to do that was with some quick crowd work.  I think someone wrote about how audiences respond harder to reactive comedy versus proactive comedy, meaning if you make a joke about something that you and the entire audience just experienced, that generally has a better chance of hitting strong than something you wrote in advance on your own without the audience there.

Because I was focused on those seven horrific moments, I wasn’t paying to the audience…not that it would’ve helped.  My secret to picking a good sport in the audience is to look for the person who not only looks like they’ve got everything going for them, but is also having a good time.  Frankly, by the time I broke into my crowd work, no one was having a good time, so I just grabbed the guy closest to me.  He looked pissed!  I did eventually get him to crack and when I pointed that out the rest of the audience cheered for me.

Later in that set, while I was talking about Weight Watchers, a woman started asking me about the point value to her alcoholic drink, which she no doubt had already enjoyed a few of.  That conversation went on way too long and that was my fault.

Here’s what I think the solution is.  From time to time I’ll hear a host or hostess ask an audience member if they mind sitting in the front.  They’ll ask if they’re going to be made fun of.  The host or hostess will tell them no and then if they’re doing their job, they’ll ask me and the other comedians not to talk to that table.   And as a professional and a human, most times I’ll oblige!   I think like with any relationship, the key to a strong relationship between a comedian and an audience member is communication.

In my interview with Mike Stanley this week we mentioned the Ann Arbor Comedy Showcase being awesome because the staff there loves comedy.  I almost guarantee whoever is seating people there on any given night could tell someone being sat that maybe I’ll talk to an older gentleman and a couple as part of my act.  Bill Bushart, whose interview will post this week on here, will always talk to the male half of a couple as well.  They know comedy in Ann Arbor and they can take necessary steps to make sure both the audience and the comedian have the information they need in order to have a successful show.

And honestly, this article is all my opinion.  I’d really love to hear more people weigh in on this subject.  I just thought it was a really interesting question and I wanted to put my thoughts out there.  I realize too that my thoughts aren’t really well formed and I’m sort of ashamed that I never really put more thought into this issue before.